I recently compiled all the lessons I learned at Product School into a Product Management Manifesto, pictured below. 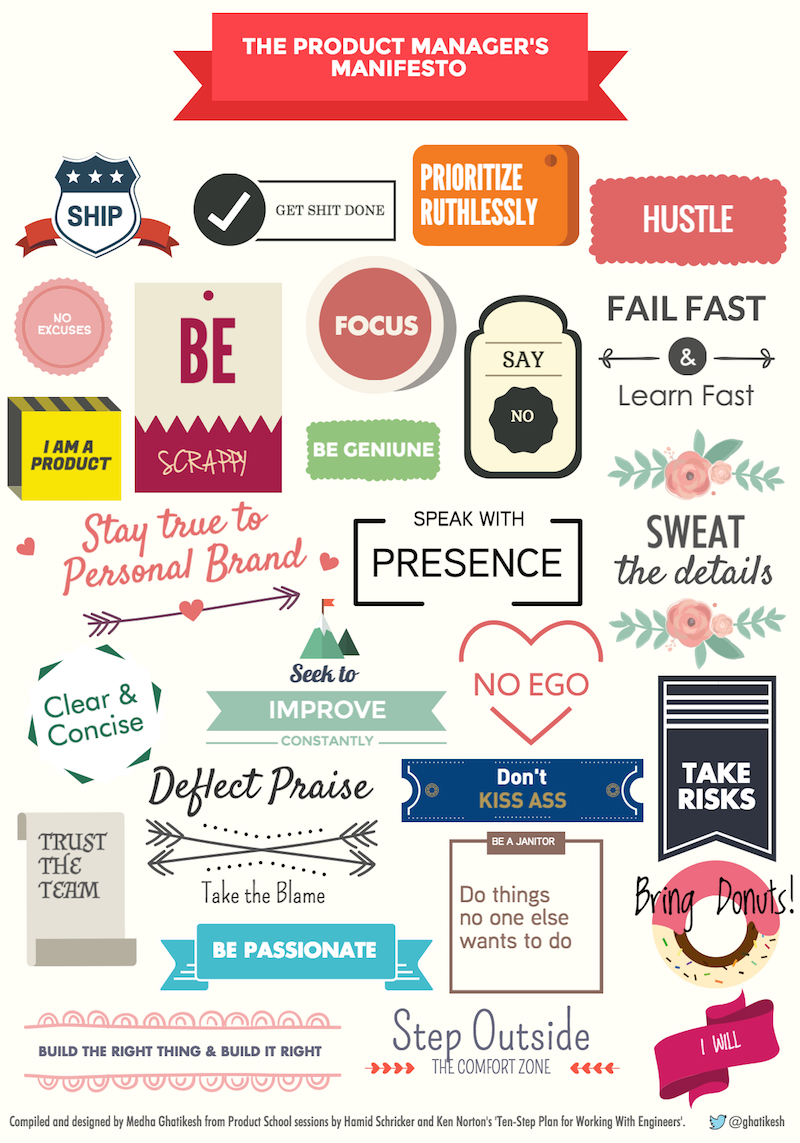 Over the past couple of weeks, I had the chance to test the ideas in the manifesto, and I was happy to discover that they helped me navigate my first few weeks in the product management (PM) discipline. I doubted whether “ship” and “fail fast” are just clichés, but I realized firsthand that nothing in the manifesto is a cliché. I found that the more I embraced the principles in the manifesto, the easier it was to navigate day-to-day situations.

Apart from the concepts included in the manifesto, I’ve discovered a few more that have helped me immensely in my product management journey. So here they are:

The worst thing you can do is make decisions without understanding something completely. So ask questions. There is no stupid question. Grab a marker, a whiteboard, and an engineer, and ask them to explain something to you.

When people use acronyms because they assume everyone already knows it, stop them and get clarification. As a new PM, you might be trying to make a great first impression, but pretending you know and understand everything—and not asking clarifying questions—is the worst thing you can do.

Because 3 months later, when everyone keeps talking about DHCs and you never asked what DHC stood for, it’s going to be much harder to ask. But you should still ask anyway.

People are counting on you to make informed decisions, so please ask questions.

This is different from the one above. Question everything.

If there’s a third-party integration involved, schedule a call with the third party so that the engineer can ask whatever questions they have.

The key here: don’t assume that everyone has everything figured out and knows what they’re doing. Sometimes people just make an educated guess based on what they know at that time, and that gets turned into “requirements” and “specs.”

Don’t follow the specs blindly “because it says so in the spec”—you may have learned something more that allows you to make a better guess. So make sure you understand why things are the way they are by questioning the reasoning behind everything. 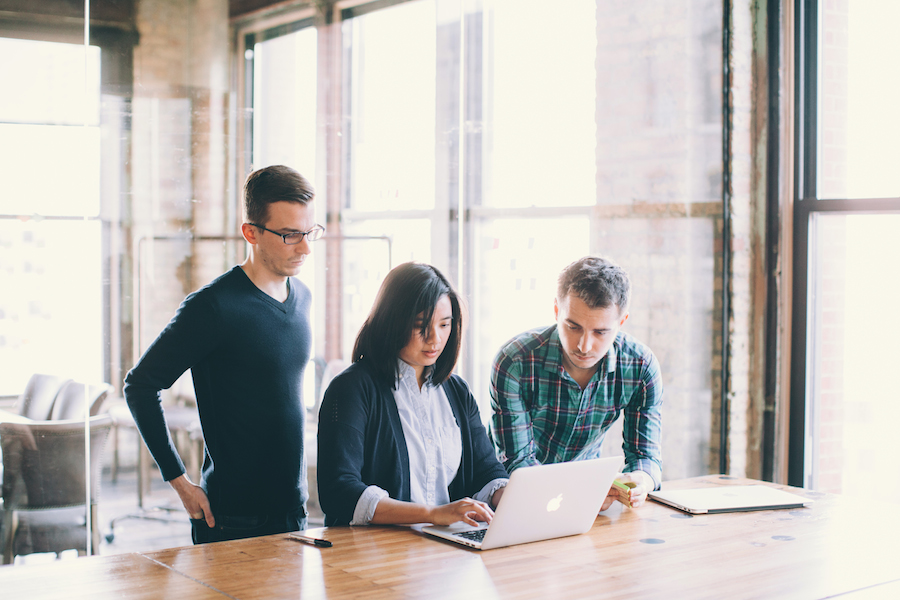 I can’t emphasize enough on how important it is to be proactive. In fact, product managers should really be called proactive managers. As a new PM, several opportunities will come up where you’ll have a choice: you can do something about it right away, or you can put it off for later.

You’ll see opportunities where you can proactively do something that’ll make someone else’s job easier. Do it. Provide product review feedback as annotated diagrams so that it’s easier for the engineer to follow, and draw clear mockups that the designer can easily understand.

However, if you’re a procrastinating manager instead and you decide to send the email on the train ride home, you’ve just wasted a whole dev day for your engineer. Not cool. Do everything sooner rather than later. Unblock your engineer now. Give the designer feedback now. Get clearance from the PM you report to now.

4. Be patient, but work with a sense of urgency

One key takeaway from Intercom’s book on product management is that no change is a small change. “Why don’t you move this bar above, and push the banner below. Seems like a really simple change.” Nothing is as simple as it really seems until you investigate and understand more about what’s involved.

So although you might be rearing with ideas to ship tomorrow, understand that it takes time to build quality software—so be patient. Don’t get impatient with your developers and ask them why it wasn’t finished yesterday. 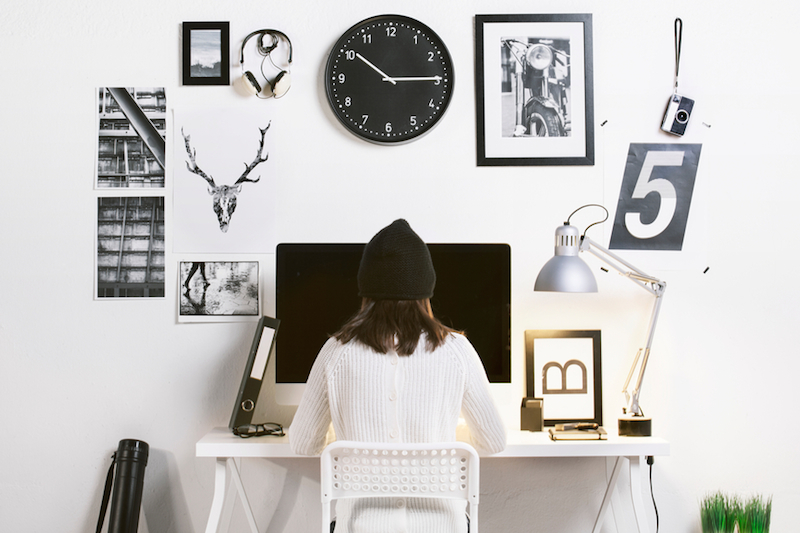 But being patient isn’t an excuse to be lazy. You must still work as though everything is going to ship tomorrow. Your energy and passion is contagious and will rub off on others, so maintain a self-imposed sense of urgency.

From a Quora answer:

Jugaad has come to refer to a habit of mind, born out of historical scarcity and an environment of uncertainty, which emphasizes ad hoc improvisation and flexibility as a way of getting things done. Jugaad means different things in different contexts, but it’s fundamentally the art of making things work. Jugaad enables people to come up with quick, innovative, and low-cost ways of solving problems, and to make something work even when conventional wisdom says it isn’t possible. It’s a philosophy that’s at the heart of Indian entrepreneurial energy and optimism.

When you have a blocker on your project, it’s easy to get disheartened and give up, calling the project a failure. However, the way of jugaad embraces blockers and tries to find an innovative way to solve a problem with whatever you have available. You may not have everything you need, but you take what you have and you make it work.

The Silicon Valley word for it would be hustler. Work with the energy and optimism that it can be done, and that you’ll find a way. Keep thinking about shipping something, anything. Ship the smallest valuable thing to test your hypothesis. But keep it going. When you have a blocker, don’t throw your hands up in the air and call it done—find a workaround. Find a way to reduce the scope.

There’s always something you can do. If you get disheartened, you won’t find a way. If you embrace the spirit of jugaad, you’ll find a way.